What is woman’s role in the Church?

Our local diocesan newspaper, Today’s Catholic, runs a column called Living the Gift of Womanhood, which is organized by my employers.  I was asked to write this month’s contribution about woman’s role in the Church.  Here’s what I submitted:

After I spoke at a local Catholic luncheon, a woman stood up and announced, “I would like to vote Angela as the first female priest.” The room erupted in laughter.

After the noise died down, she asked, “When will we ever have women priests?”

Years ago, as a somewhat-arrogant college freshman studying theology, I sat frowning as a proponent of women’s ordination presented her case. Afterward, I concluded that she was simply ‘a whiny dissenter’.

Today, having worked ‘on-the-ground’ for several years in Catholic women’s ministries, I look back at that presenter with compassion. I recall the pain in her voice as she described remote communities unable to receive Eucharist, due to the priest shortage. She longed to see those souls receive the sacraments. Her concern was genuinely maternal.

The conversation surrounding women’s ordination is extremely complex. I can only allude to it. Beneath it, however, remains a larger question: What place does a woman have in the Catholic Church?

I treasure this fundamental Scripture verse, ripe with meaning:

Our dear Holy Father has echoed this verse’s implications quite publicly and frequently. During his recent visit to the Philippines, he lamented the lack of girls for a planned youth Q&A session:

“Women have much to tell us in today’s society. Sometimes we are too machistas and we don’t allow enough space to women. But women can see things from a different angle to us, with a different eye. Women are able to pose questions we men are unable to understand. […] So when the next pope comes to Manila, please let there be more girls.”

We’ve heard many people belabor the fact that men are able to assume roles in the Church that women cannot. In the above quote, however, Pope Francis points to women’s role in the Church: to be God’s image in ways that men cannot.

The Pontifical Council for Culture, in fact, held a Plenary Assembly last month on “Feminine Cultures: Equality and Difference.” I encourage you to read the relevant documents on http://www.cultura.va.

In them, the Council notes that women, while entering more fully into a society that is markedly masculine, have historically sacrificed their unique feminine qualities to varying degrees. The Council finds this an unacceptable outcome, and challenges us to uphold ‘the feminine genius’:

“It is with respect to this originality of women that the true development of the feminine position will develop.”

In God’s wisdom, the Virgin Mary was the first disciple. The Risen Christ appeared to Mary Magdalene first. Surely, our good God willed them to these vocations not in spite of their womanhood, but—in part—because of it. After all; he’s the one who made them women!

Throughout the history of Christianity, we see women: Catherine of Siena restoring the papacy to Rome; countless women worldwide creating schools for the poor and outcast; Bernadette Soubirous, Catherine Labouré, and other women or girls of nearly all the approved modern Marian apparitions. Let’s not forget the mothers and grandmothers who, as Pope Francis noted late January, “are the ones who in primis transmit the faith.”

When that woman stood up and ‘voted me first female priest’, I was taken aback, but also happy that she voiced her question.

My answer to her was multifaceted. The bottom line for me, however, is that fundamental mystery of Creation: “in the image of God he created them; male and female he created them.”

What is the role of women in the Church? To uniquely reveal Almighty God. Men and women, while equal in dignity, were never meant to be the same.

Do we have some work ahead of us to ensure that this truth is manifested in the Church’s daily life? Undoubtedly; while divinely instituted, the Church is also human. We’ve allowed the world’s “battle of the sexes” to osmose into our Catholic family.

Let’s meditate on where God is calling us: not to hegemony or homogony, but to celebrate and embrace all the unique gifts that distinguish women from men, and vice versa.

Add to the Conversation: Cancel reply 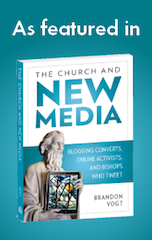